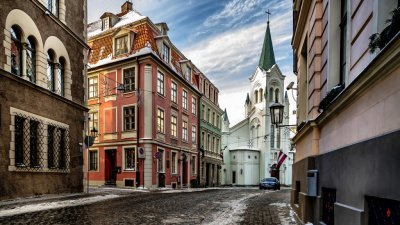 Shifting of emphasis to non-offshore jurisdictions when using non-resident structures is one of the trends in the international tax planning of recent time. Companies registered in the European countries can use not only advantageous tax regime provided by local legislation or the EU rules, but also the rules of international double taxation treaties.

Latvia is not an exception. Its tax legislation makes Latvian companies to be rather convenient instrument for international business. This article considers the advantages of Latvia as a new and promising jurisdiction for tax planning.

The corporate income tax rate is 15%.

Microenterprises are subject to a reduced tax on their annual turnover. The tax is to be paid quarterly (the tax base is defined as annual proceeds of the company without deduction of expenses). The first EUR 7000 are taxed at a rate 12%, and income from EUR 7000,01 and more is taxed at a rate 15% (from 1 January 2018 the tax rate will be 15% of the whole income). The reform of microenterprises regime up to its full discontinuation is currently under discussion.

Dividends received by Latvian company are exempt from tax (regardless of whether the country, which paid the dividends, is a EU member state or a third country). However, there is an exception for dividends received from countries included in Latvia’s list of low-tax and tax-free territories, approved by the cabinet of Ministers of Latvia on 26 June 2001 No. 276 (further – the “blacklist”).

Dividends payable by a Latvian company to a non-resident legal entity are exempt from withholding tax, with exception for dividends paid to persons resident in the blacklisted countries (such dividends are subject to a 15% withholding tax).

Dividends payable to individuals are subject to a 10% withholding tax in Latvia.

Interest received by a Latvian company is taxed at a standard rate of 15%.

Other cases of withholding taxation

All payments (including payments for supplied goods or services) made by a Latvian company to a non-resident company or individual of a blacklisted state are subject to a 15% withholding tax in Latvia (with exception for supply of goods acquired in the European Union or countries of European Economic Area and publicly traded securities, if such goods and securities are acquired at market prices).

In case if a Latvian company pays for goods or services (except for management and consulting services), supplied by non-resident company not included into the blacklist (i.e. non-offshore) the withholding tax is not levied.

Payments for consulting and management services supplied by a Latvian company to a non-resident company are subject to a 10% withholding tax (unless the rate is reduced by a double taxation treaty).

Rental payments for use of property made to a non-resident company are subject to a 5% withholding tax.

Remunerations received from participation in Latvian partnerships are subject to a 15% withholding tax.

Income received by a non-resident from the sale of real property in Latvia or sale of company’s shares where more than 50% of its assets consist of real estate in Latvia is subject to a 2% withholding tax.

Regardless of the above-mentioned provisions, if the payments are made to companies or individuals from the blacklisted states, a 15% withholding tax is to be paid.

The rules of the EU Parent-Subsidiary and Interest-Royalty Directives set forth that dividend, interest and royalty payments between the affiliated companies within the EU (as well as in Switzerland) may, subject to certain conditions, be exempt from withholding tax.

Latvian VAT legislation is based on the relevant EU rules (EU Directive 2006/112/ЕС).

The reduced VAT rates are applied to certain kind of goods and services – 12% (e.g., pharmaceuticals) or 0% (e.g., export operations), as well as exemption from VAT (e.g. financial, insurance services, education, healthcare and others).

A case: Latvian agent company deals with a British partnership in the course of trading

Consider the example where the British partnership consisting of two offshore companies and having a separate legal personality receives income from a Latvian company.

In view of the fact that the United Kingdom is not a blacklisted jurisdiction, generally no tax is withheld in Latvia. The partnership distributes the received income between the partners.

LLP or LP here is not subject to taxation in the UK as a separate taxpayer: each of its partners accounts for its income from the partnership and pays taxes in the place of their residency.

Therefore, in cases where both partners are incorporated in tax-free jurisdictions (Seychelles, BVI etc.), the income received by the partnership is virtually not subject to taxation.

Since 1 January 2013, Latvia has actually introduced a tax-exempt regime for international holdings in order to attract foreign capital.

The holding regime existing in Latvia can be characterized by the fact that the incentives granted to holding companies do not demand the companies to comply with a list of certain conditions as it is usually practiced in the most of EU countries (such as percentage of participation in capital, duration of ownership of subsidiary companies’ shares, type of activity of subsidiary companies).

The Latvian holding company can be of any legal form: in most cases it is a limited liability company (SIA) or a joint-stock company (AS).

Shareholders and directors can be of any nationality (citizenship) and residency.

Besides the holding activity as such – ownership (holding) of the subsidiary companies’ shares, their management and deriving income – Latvian companies may conduct other businesses, deal with Latvian citizens and companies, use (purchase, rent, lease) immovable property, intellectual property rights, either in Latvia or outside it.

Example of a holding structure (investing to the EU)

* Withholding tax is not levied in accordance with the EU Parent-Subsidiary Directive (under certain conditions) or is withheld at a lower rate provided in a double tax treaty (if available).

** Taxation according to rules of the individual’s country of residence. The credit for tax withheld in Latvia at source of payment may be available.

*** Withholding tax is not levied in case if the country of the recipient company is not blacklisted.

**** Taxation of the received dividends depends on a specific jurisdiction and legal form of the recipient. A zero taxation may be available under certain conditions.

* Withholding tax is not levied in case if the country of the recipient company is not blacklisted. In allocating interest payable to the costs the Latvian thin capitalization rules should be considered.

** Taxation of the received interest depends on specific jurisdiction or legal form of the recipient. A zero taxation may be available under certain conditions.

* Withholding tax is not levied in case if the country of the recipient company is not blacklisted.

** Taxation of the received royalties depends on specific jurisdiction or legal form of the recipient. A zero taxation may be available under certain conditions.

The double taxation treaties provide mechanisms for tax credit (tax deduction) in respect of taxes paid in other country, as well as lower rates and tax exemptions in respect of some types of income (e.g. dividends, interest, royalties etc.)

To summarize all of the aforesaid we shall specify the advantages of Latvia for corporate and tax planning.