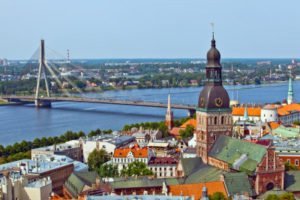 The main sources of the tax law of Latvia are Law On Taxes and Duties, Law On Corporate Income Tax, Law On Value Added Tax, Law On Taxation of Microenterprises and others.

A company is considered to be a tax resident if it is incorporated in Latvia.

Residents are taxed on their worldwide income. Permanent establishments of foreign companies are taxed in the same way as Latvian resident companies.

Non-residents are taxed only on income received from the Latvian sources.

The income tax is imposed only on amounts distributed to the members of a company or other payments of the same nature. If the profits are reinvested and not distributed no tax will be imposed. The standard income tax rate is 20 %. The effective tax rate may be 25 % after calculation of tax base with use of special coefficient.

Dividends received by a Latvian company are exempt from tax (regardless of whether the country which paid the dividends is a EU member state or a third country). However, there is an exception for dividends received from countries listed in Latvia’s blacklist (which includes over 25 states and territories, primarily offshore jurisdictions).

Capital gains received from alienation of shares are exempt from tax (with exception for shares of offshore companies).

In case if any Latvian company receives dividends from any other companies (except offshore companies) the tax is not imposed. Dividends paid by Latvian company are subject to tax at a standard rate of 20 %. If the person to whom the dividends are paid is a private individual resident in Latvia, than the amounts of such dividends shall not be included in a tax base of personal income tax. If dividends are paid by Latvian company to legal entity non-resident in EU or EEA countries, it will be subject to tax in Latvia at a standard rate of 20 % and to tax in country of recipient in accordance with its legislation (unless double taxation treaty establishes other rules).

Interest received by a Latvian company are subject to tax at the standard rate of 20%.

Other cases of withholding taxation

All payments (including payments for supplied goods or services) made by Latvian company to a non-resident company or individual of a state included into the Latvia’s blacklist are subject to a 20% withholding tax in Latvia (with exception for supply of goods acquired in the European Union or countries of European Economic Area and publicly traded securities, if such goods and securities are acquired at market prices).

In case if Latvian company pays for goods or services (except for management and consulting services), supplied by non-resident company not included into the blacklist (i.e. non-offshore) the withholding tax is not levied.

Regardless of the above-mentioned provisions, if the payments are made to companies or individuals from the states included into the blacklist, a 20% withholding tax is to be paid.

The rules of the EU Parent-Subsidiary and Interest-Royalty Directives set forth that dividend, interest and royalty payments between the affiliated companies within the EU (as well as in Switzerland) may be exempt from withholding tax.

Other taxes and duties

Real property tax is levied at a rate 1,5% of the cadastral value of the land and buildings.

Legislation on value added tax in Latvia is based on the EU rules (Council Directive 2006/112/ЕС).

Employers (except for microenterprises) must withhold the personal income tax (20, 23 or 31.4 % depending on the amount of income) from their employees’ salary and pay it to tax authorities on a monthly basis.

Besides that employers (except for microenterprises) must make monthly social insurance contributions at a rate of 35,09% (24,09% of which are paid from the part of employer and 11% are withheld from the employee’s salary).

The Law provides a special tax regime for “microenterprises”. This regime may be used by SIA or individual entrepreneurs.

To be deemed “microenterprise” the company must qualify the following characteristics:

Microenterprises are subject to a reduced tax on their annual turnover. The tax is to be paid quarterly (the tax base is defined as annual proceeds of the company without deduction of expenses). Microenterprises pay income tax at a rate 15 % on all its income regardless of distributed of dividends and other payments (the rule of 20 % on dividends and 0 % on reinvestment is not applicable).

The Agreement between Russia and Latvia on avoidance of double taxation and prevention of tax evasion was signed in 2010 and entered into force on the 6th of November 2012 (is applied from the 1st January 2013).

The DTA provides the opportunities of exchange of information between the competent authorities of Russia and Latvia and their mutual assistance in tax collection procedures.

Latvia has ratified the OECD Convention on Mutual Administrative Assistance in Tax Matters as amended by the Protocol 2010 (entered into force from 1 November 2014).

Latvia also has bilateral tax information exchange agreements with some offshore jurisdictions such as Guernsey and Jersey (concluded in 2012 and 2013).