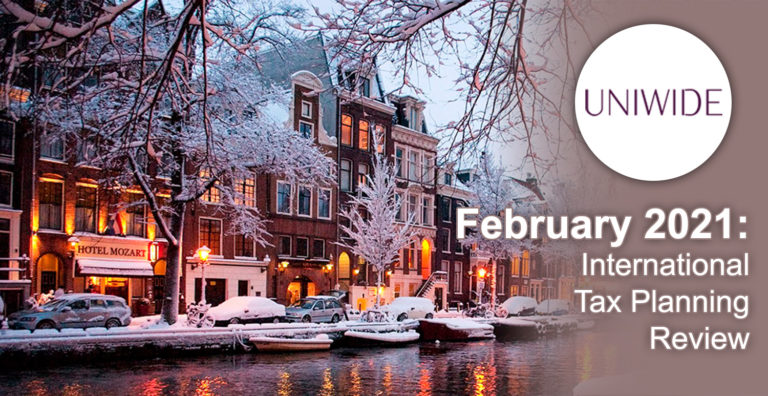 Contents:
1. Changes to the EU list of non-cooperative tax jurisdictions
2. Belize extends the tax reporting deadline for IBC companies
3. Cyprus will not restore its citizenship-by-investment program
4. UAE to grant citizenship to qualified candidates
5. Media investigation on “tax haven” in Luxembourg

Changes to the EU list of non-cooperative tax jurisdictions

The list of “non-cooperative” tax jurisdictions maintained by the EU authorities has changed again.

Dominica (Commonwealth of Dominica) has been included in the “black” part of the list (countries not fulfilling their obligations), and Barbados was excluded from it.

Morocco, Namibia and Saint Lucia have been excluded from the “grey” list (which includes countries that do not yet meet international tax standards but have made sufficient commitments in this field).

According to the announcement, the Annual Business Tax Return for 2020 must be submitted by IBCs before 30 September 2021 (the previous deadline was 31 March).

It is worth reminding that in 2018-2019 significant changes took place in Belize tax legislation. The economic substance requirements were introduced for Belize companies, and IBCs ceased to enjoy automatic tax exemption.

From 1 January 2020, the worldwide income of IBC companies (that is, income received both within and outside Belize) is subject to taxation. The standard business tax rate is 5%. All Belize IBCs are required to submit annual business tax returns.

Cyprus will not restore its citizenship-by-investment program

The President of the Republic of Cyprus says that the country will not return to granting citizenship in exchange for investment, which has received the name of “golden passports” in the media. Cyprus will offer other incentives for foreign investment, but citizenship will no longer be granted.

The Cyprus citizenship-by-investment program was cancelled as of 1 November 2020, following the investigation that revealed the program’s vulnerability to abuse, including critical deficiencies in candidates’ due diligence check procedure.

Although these gaps were eliminated at the last stage (2019-2020), the Cypriot authorities, taking into account the EU’s position, refused to either prolong the current program or develop a new one.

Around 3000 people benefited from the program that existed in Cyprus since 2013 and brought the country more than 9 billion euros.

The United Arab Emirates authorities – the largest business centre and transport hub – have announced plans to grant the country’s citizenship to target groups of foreigners.

Currently, foreign citizens play a key role in the country’s economy and account for up to 80 per cent of its population. Previously, to attract investment and diversify the economy, the UAE expanded the opportunities for foreigners to acquire resident status, but citizenship was still granted only in special cases.

It should be noted that the new option will not be a literal “citizenship-by-investment” program available to any applicants in exchange for a certain amount of investment.

UAE citizenship will only be granted to specific categories of investors and in-demand professionals, particularly scientists, doctors, engineers, artists, and their family members.

The representatives of each of these categories will have to meet certain criteria. For example, investors will have to own property in the UAE, inventors – to have their inventions patented, doctors – to specialize in disciplines highly-demanded in the UAE, scientists – to be actively involved in research activities for at least ten years, etc.

The nomination procedure will be carried out through local courts and Emirates authorities. Newly naturalized citizens will be able to retain their current citizenship, which means the possibility of dual citizenship.

Le Monde newspaper has published the results of its investigation on Luxembourg. According to the authors, Luxembourg is a de facto tax haven. Tens of thousands of companies are registered there, most of which are “phantom” with no real office or employees and controlled by non-residents, including billionaires, celebrities and high-ranking politicians.

It is also argued that, despite the public access to beneficial ownership information in force in Luxembourg, beneficiaries still cannot be reliably identified in respect of almost half of the companies and foundations registered in the country. The relevant agencies are understaffed to perform these functions effectively.

The official release made by the Government of Luxembourg refutes the above findings. It states that Luxembourg fully complies with all European and international taxation and transparency rules and applies all information exchange measures to combat tax abuse.

The announcement highlights that Luxembourg has no special tax regime for multinationals or digital companies. The country’s economy specializes in services and high value-added production.

Being one of the leading international financial centres, Luxembourg is constantly evaluating and updating its supervisory architecture and anti-money laundering and terrorist financing package and applies all European and international regulations, including the FATF (Financial Action Task Force) recommendations.