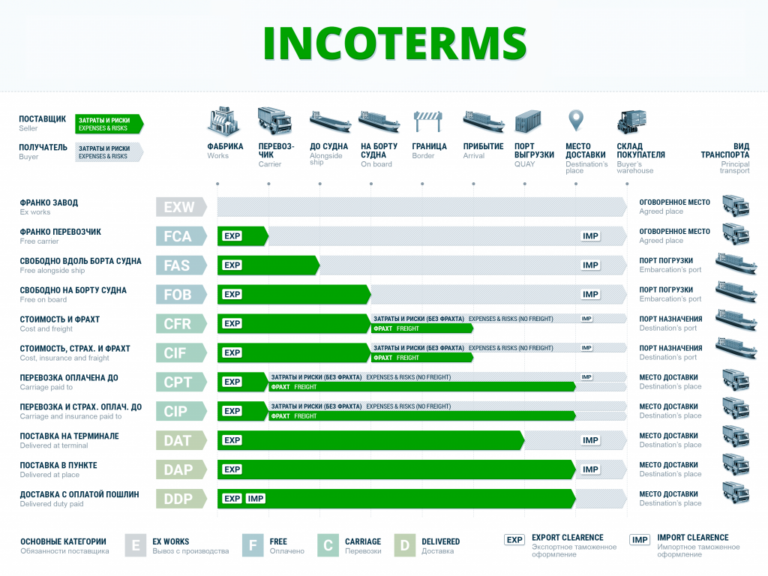 On 10 September 2019 the International Chamber of Commerce (ICC) has released Incoterms 2020 – the latest version of international commercial terms. The Incoterms rules were first published in 1936 and then reviewed periodically as the international trade developed.

The new version reflects the latest developments in the practice of international delivery of goods and is designed to provide greater clarity in the division of responsibilities between importers and exporters. Besides this, as noted at the ICC website, the introduction to Incoterms 2020 contains more detailed explanatory notes for choosing the most suitable Incoterms rule in a particular situation.

According to the ICC Secretary General, the Incoterms 2020 rules form the universal language of international sales transactions and contribute to greater confidence for participants of global trading system, allowing them to clearly understand their responsibilities and avoid costly misunderstandings.

The new version does not contain ‘revolutionary’ changes. As before, it includes four groups (E, F, C and D) of standard terms of the contract for the international sale of goods.

Abbreviations of the terms remain the same, with the exception of the term DAT (Delivered at Terminal) from Incoterms 2010, which in the new version has been replaced with DPU (Delivered at Place Unloaded).

A part of the terms, as before, can be used for delivery by any means of transport (EXW, FCA, CPT, CIP, DAP, DPU, DDP), and the rest – only for sea and inland water transportations (FAS, FOB, CFR, CIF).

Some rules of the new version introduce additional options regarding the obligations of the parties, the distribution of the insurance duties between them, prescribe the possibility of the parties to use their own transport (without involving a carrier), clarify the full list of costs related to the use of each of their terms. However, specific changes in terms and comments on them require detailed analysis.

Incoterms 2020 may be applied from 1 January 2020. However, one can continue using previous versions of the rules. In this regard, the participants in international trade, who choose Incoterms to govern their relationships, are recommended to expressly specify which version of Incoterms they intend to use.