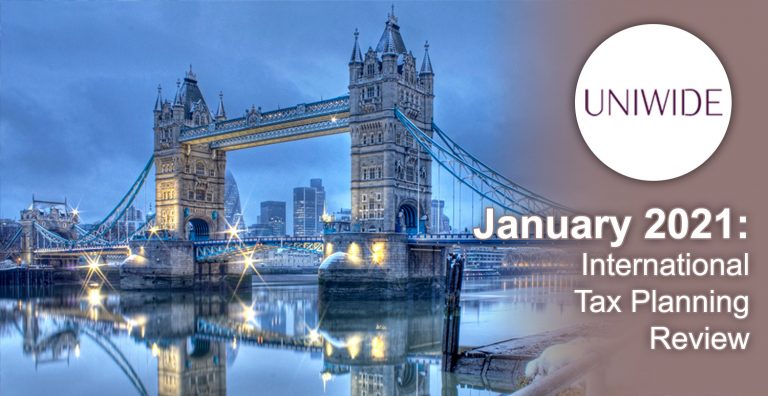 Contents:
1. OECD to revise the Common Reporting Standard for automatic exchange
2. The European Parliament demands to change the rules of blacklisting tax jurisdictions
3. UK will waive most provisions of the European DAC6 Directive
4. Singapore acceded to the Hague Apostille Convention
5. New withholding tax rates between Russia and Luxembourg will apply after 1 January 2022

OECD to revise the Common Reporting Standard for automatic exchange

The Organization for Economic Co-operation and Development (OECD) is planning a public consultation to improve the Common Reporting Standard (CRS) for the automatic exchange of financial account information.

The need for changes is explained by innovative processes in the financial sector that have taken place in recent years. For example, some countries are calling for the inclusion of new financial products such as electronic money, cryptocurrencies and other crypto assets in the CRS standard.

The consultation may also address such issues as reporting joint accounts, controlling persons of passive non-financial entities and holding accounts through a trust etc.

The European Parliament intends to change the method by which countries are being included in the list of non-cooperative tax jurisdictions (known as the EU blacklist). The current system, according to members of the European Parliament, is “confusing and ineffective”.

It is proposed to revise the criteria by which the tax system’s fairness and the need to expand the tax base are determined. Countries that have taken only nominal measures to implement the recommendations given to them should not be immediately excluded from the blacklist. Moreover, it is proposed to expand the criteria for classifying countries as tax havens and automatically include in the list the countries that still follow a zero-rate tax policy.

It is noted that the EU list, created in 2017, had a positive impact, but did not fulfil its potential, since the countries that remain on the list at the moment account for only 2 per cent of global tax revenue losses. In the meantime, many jurisdictions excluded from the list at various times (for example, Guernsey, the Bahamas or the Cayman Islands) remain to be attractive tax havens.

The proposed changes are aimed at making the process of listing and removing countries from the list more transparent, consistent and impartial.

UK will waive most provisions of the European DAC6 Directive

The UK Government will waive almost all provisions of the EU Council Directive 2018/822 of 25 May 2018 (further – DAC6) concerning mandatory disclosure of cross-border tax planning arrangements.

This step will be one of the first manifestations of legislative freedom that the UK received after leaving the EU and the transition period. In the trade agreement, concluded on 24 December 2020, the EU and the United Kingdom committed to adhering to OECD standards without commitments to establish stricter rules (which EU regulation implies).

The UK statutory instrument implementing DAC6 Directive will be replaced with the new one, that requires UK “intermediaries” (this term covers primarily legal and tax consultants) to report only category D arrangements. They refer to schemes aimed at circumventing the automatic exchange of information on financial accounts (OECD CRS) or concealing the beneficial owners of legal entities and other structures. Arrangements falling under other categories (A, B, C, E) will not be subject to reporting. No arrangements of any kind have actually been reported yet, because activation of DAC6 has been delayed by the COVID-19.

Other types of tax planning arrangements which would be subject to reporting under DAC6, will be governed only by the UK’s pre-existing legislation that requires disclosure of tax avoidance schemes to HMRC. This regime will remain until the UK has implemented the Mandatory Disclosure Rules (MDR) developed by the OECD.

It is expected that this measure will not only reduce the amount of additional compliance burden for consultants but also reduce the uncertainty about what is subject to reporting (given the possibility of a broad interpretation of hallmarks listed in DAC6).

On 18 January 2021 Singapore has deposited to the Netherlands Ministry of Internal Affairs an instrument of accession to the Convention of 5 October 1961 Abolishing the Requirement of Legalisation for Foreign Public Documents.

This Convention allows to affix an apostille on public documents executed in a participating state and subject to use abroad. The apostille is considered a single formality making a document legally valid in a foreign state and substitutes a multi-step procedure of consulate legalisation. Moreover, a document with apostille may be used in any state participating in the Convention, while the legalisation is required to be made separately for each state in which a document is to be used.

Singapore’s accession to the Apostille Convention should legally facilitate both the interaction of individuals involved in cross-border relations and many business activities of Singaporean companies.

With the accession of Singapore, the number of parties to the Convention reaches 120 countries. The Convention will enter into force for Singapore on 16 September 2021.

Along with Cyprus and Malta, Luxemburg has signed a Protocol amending its double tax treaty (DTT) with the Russian Federation. It provides an increase in withholding tax rates on dividend (from the current 5 or 10% to 15%) and interest payments (from the current 0% to 15%). The Protocol was signed on 6 November 2020 and ratified from Russia’s side by the Federal Law of 30 December 2020.

The Protocol will apply in both Contracting States for tax periods starting from or after 1 January of the calendar year following the year I which the Protocol enters into force. However, the Protocol’s entry into force is linked to the date of the latest notification by the contracting states of completion of their internal procedures necessary for entry of the Protocol into force.

Luxembourg, in contrast to Russia, has not yet completed those procedures before the end of 2020. It means that the revised version of the DTT (including the increased tax tares) will apply not earlier than 1 January 2022.  The current reduced tax rates (5 or 10% on dividends and no withholding tax on interest) will remain throughout 2021.

At the same time, one should follow the explanations of the countries’ competent authorities on this issue.