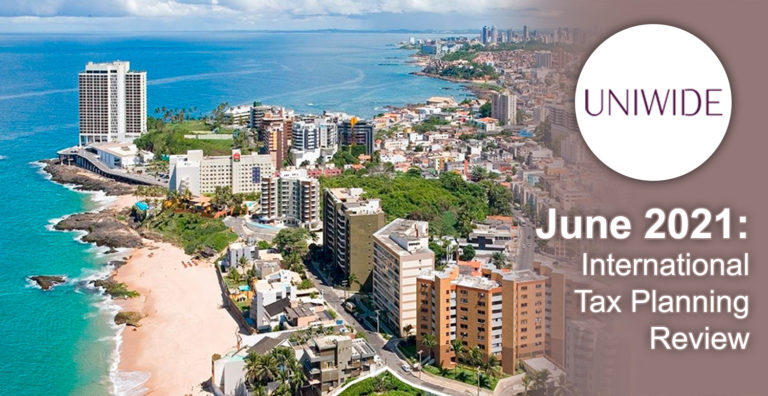 Contents:
1. El Salvador has become the first state that allowed bitcoin as a legal tender
2. The new UK Finance Act enters into force
3. The European Court of Justice interpreted the concept of “fixed establishment” in determining the place of cross-border services provision
4. The UAE Federal Tax Administration announced new conditions for reduction of or exemption from fines
5. G7 countries have approved the minimum corporate tax rate

El Salvador’s Parliament has passed a law that makes bitcoin a legal tender. According to official sources of El Salvador, the measure was introduced “to create employment opportunities, promoting true financial inclusion and economic dynamism.”

The law provides for creating a digital infrastructure that allows the unrestricted use of bitcoin as an official means of payment within three months.

As conceived by the supporters of the law, a trust will be created in the Development Bank of El Salvador (BANDESAL), due to which the automatic convertibility of bitcoin into the US dollar will be powered. At the same time, the bitcoin to US dollar exchange rate will be freely set by the market.

The UK has published the Finance Act 2021 . It introduces, in particular, the following tax measures:

The decision in the Titanium Ltd. No. С-931/19 was made upon the request of an Austrian court as to whether the concept of “fixed establishment” includes letting of immovable property on lease in Austria by a foreign company that has no staff in Austria and operates by engaging a third-party managing company under a civil law contract.

The European Union Court of Justice (ECJ) has pointed out the following.

First, a “fixed establishment” should not be a place deliberately created to carry out activities of a temporary, preparatory or auxiliary nature.

Second, the “fixed establishment” includes both material and human resources necessary and sufficient to provide the relevant services. The ECJ has also stated that “…a structure without its own staff cannot fall within the scope of the concept of a ‘fixed establishment’”

The Court has found that the lack of human resources does not allow to argue that letting the immovable property on lease is an economically independent business. Moreover, the fact that the taxpayer involves a third-party company in operating the immovable property also shows that conducting business this way does not form a permanent establishment for VAT purposes.

Following the issue of the relevant rules, the UAE Federal Tax Administration (FTA) has published guidelines on how a taxpayer can reduce or be exempted from fines.

According to the guidelines , any person has the right to claim for a reduction or complete exemption from punishment for violating the UAE tax laws if it can prove that there was an acceptable excuse for the violation.

This excuse must be supported by the evidence justifying the violation that led to the imposition of administrative fines. In this case, a deliberate violation of the law cannot be qualified as a violation for a good reason.

The term for consideration of a claim for reduction of or exemption from a fine is 40 working days from the date of its receipt by the UAE tax authority. Applicants are notified of the results of the consideration within 10 working days after the decision is made.

G7 countries (Canada, France, Germany, Italy, Japan, the United Kingdom, the United States) have reached a consensus that the minimum corporate tax rate should not be lower than 15% for large corporations.

The point of introducing such a tax rate, according to the G7 participants, is that such a measure will force large companies to pay a higher tax rate in the countries where they sell since such corporations are often registered in low-tax states and territories. Rishi Sunak, the head of the UK Treasury, believes that this reform will cover the world’s largest firms with the profitability of at least 10%, while 20% of any profits in excess of 10% will be redistributed and then taxed in the countries where they sell.

This initiative is also supported by the International Monetary Fund (IMF). The IMF chief economist Gita Gopinath believes that “transferring” money to low-tax jurisdictions seriously reduces the corporate tax base, from which government agencies can receive revenues and redistribute them for various social needs.

The agreement on establishing a corporate tax rate of at least 15% will further become the subject of discussion in the G20 format (the “Group of Twenty”), which also includes Russia, India, Turkey and other countries.